Part Two – click here to start with Part One

I knew the stories of persecution. Not only were they passed from grandma to grandchild, but the most important Mennonite text, second only to the Bible, is The Martyrs Mirror, published in 1660. Stories about preachers who had their tongues screwed to the tops of their mouths to keep them from preaching. Stories that include hot branding irons, stocks and the rack. For a twentieth century child flipping through The Martyrs Mirror, this history was titillating.

At my Mennonite high school Anabaptist History was a required course. Anabaptists—adult baptizers—grew out of the Reformation. While the Reformers ended some practices of Catholic Church, the Anabaptists wanted to return to the ways of Jesus. For them, the personal decision to live as a Christian was a serious commitment. Not a birthright. And not a mechanism for the state. So, the Anabaptists stopped baptizing their babies and started baptizing each other.

Once, my entire high school watched a movie about the martyrs, a bloody true story set in Switzerland. It was meant to humble and inspire us. But we left laughing, and watched classmates zombie-walk, moaning, “Burn them. Burn them all.”

At my computer, Jim and I zoomed in on the satellite image of Trachselwald castle. A cluster of red-tile roofs. Then I saw the tower, evident by a long dark shadow that cows in the adjacent meadow seemed to be avoiding. 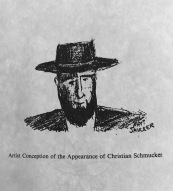 Christian Schmucker’s booklet started with a short history of the Amish, who broke away from the group that would become the Mennonites. The schism happened because the Amish felt that sinners must be excommunicated.

Staring at the image of Trachselwald castle, I thought of my Poppop. He had been shunned. I was told there was a funeral, and church leaders forbade the family from having any contact.

His sin? He enlisted in the navy to fight in World War II.

Mom told me stories. He used to barricade himself in his bedroom with a shotgun and cry. He said, “No one loves me, no one loves me,” sobbing, for hours, while Mom sat on the other side of the door telling him that they did love him, and please, not to shoot himself.

The tower’s shadow made my heart heavy. It made me think about torture, and shunning—the core of the Amish origin story. I remembered standing near my grandparent’s refrigerator, peering into the dark living room. My Poppop, sitting, silent, by the window with a cup of coffee and a cigarette. He stared out at tree branches. Birds. The garden. Cows in the meadow. The ragged edge of the creek. But what did he see?

I could have been excommunicated too.

My sin? Being queer.

As a kid, being cast out felt like a real threat. Queer kids don’t have to come from religious families to face the terror of being disowned.

Christian Schmucker was a prisoner in the tower for four days in April 1745. Was he tortured? Chained? Threatened with death? I don’t know. The booklet says that after he was released, he took his family and hid in the Jura Mountains until they could get passports for a voyage to Pennsylvania.

After coming out, a therapist suggested that I had PTSD.

Did Poppop have PTSD too? When I was in high school, my Poppop told me about a dream. “I was driving up Gap Hill trying to get home,” he said, “and the car kept getting slower and slower. Other cars were passing me, honking. Folks were shaking their fists at me, but I had the petal to the metal!”

“Little Volkswagens passed me. An Amish buggy passed me, and they shook their fists too! It was terrible,” he said, chuckling.

I laughed with him, but I could hear the pain in his dream. He was alone, trying to get home and everyone was angry at him, no one offered to help.

There is a famous story of a reformation-era Anabaptist who escaped from prison and ran across a frozen lake to avoid his captors. He made it safely to land, but the prison guard fell through the ice. The Anabaptist went back to help. He saved the guard. The guard took him back to prison and soon after the anabaptist was put to death.

Like that anabaptist, Christian Schmucker was willing to stand against the government and the state church, facing prison, torture and death. My Poppop went against his community to fight tyranny. They all had a fearless trust and followed their hearts.

I tapped their courage when I came out as queer.

I wondered, what would happen at Trachselwald castle? Would old wounds open? Would the love expand? Both? Something else?

Just before leaving for Switzerland, I turned the page in the Thict Nhat Hanh book I was reading and found his meditation called The Five Touchings of the Earth. Thict Nhat Hanh is a Vietnamese Buddhist monk. The first of the five touchings is a meditation on blood-family ancestors.

Reading it, I was tingling again. One line stood out to me: I am the continuation of my ancestors and it is their suffering that I am transforming.

The next morning Jim and I flew to Europe.

Somewhere over the Atlantic, I dreamed I was standing in a medieval castle courtyard looking up at the tower. There was one window at the very top. A woman beside me said, “That’s the only way in or out.” I turned to look at her, but before my eyes could take her in, a shadow passed over. I looked back toward the window and saw a winged dragon sitting on the ledge. My knees buckled. I wanted to run—wanted to scream—but I was frozen in place. The dragon twisted its neck to look down—at me. Its eyes seeing into my soul.

In Part Three, Ruth takes us to the Castle